The bill would also strengthen Medicaid program integrity and provide federal budget savings through a common-sense reform recommended by the US Government Accountability Office (GAO) in its July 2012 report: “Providers in Three States with Unpaid Federal Taxes Received over $6 Billion in Medicaid Reimbursements” (July 2012, GAO-12-857).

Health-care providers who owe significant back taxes for years may still receive full Medicaid payments because of a loophole in the tax laws. Under Medicare and most federal programs, the Internal Revenue Service can garnish, or offset, federal payments when a health-care provider has an unpaid tax bill, but Medicaid’s state-based system has prevented its payments from qualifying as a federal payment.

The GAO responded to a bipartisan senate request regarding this anomaly and found that “for the 7,000 delinquent Medicaid providers we identified in three states (Florida, New York, and Texas), if there had been such an automated continuous levy system in place [similar to what exists in Medicare], we estimate that between $22 million and $330 million could have been collected to offset unpaid federal taxes in 2009.”

Through the Federal Payment Levy Program, established in July 2000, the IRS can collect overdue taxes through a continuous levy on certain federal payments; this includes Medicare fee-for-service payments. This levy is continuous until the overdue taxes are paid in full, or other arrangements are made to satisfy the debt. As of February 15, 2013, CMS has realized a cumulative total of over $193 million in tax levy offsets.

The HELLPP Act includes a provision to close this tax loophole, allowing for improved collection of outstanding tax debts from Medicaid providers. The provision―which has been offered in several bipartisan bills in the past―would add Medicaid to the definition of “federal payment,” thereby extending the federal government’s continuous levy mechanism to cover payments to Medicaid providers or suppliers.

If such a program integrity mechanism could be used in Medicaid similar to the way it is used in Medicare, GAO estimates that between $22 million and $330 million in owed unpaid federal taxes could have been collected in the selected three states in 2009. 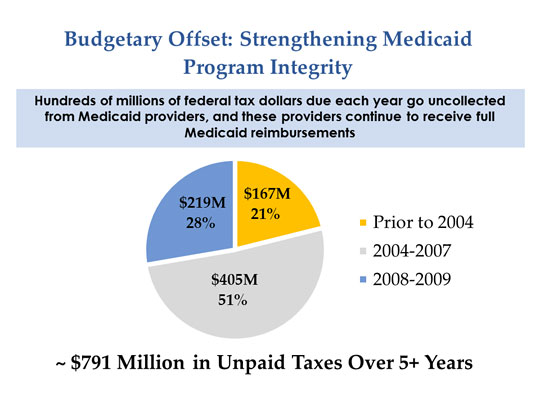